Tayla Harris has been immortalised in bronze. It is a win for women's sport 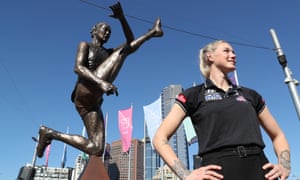 AFLW player Tayla Harris at the unveiling of a statue of her in Federation Square in Melbourne. Photograph: David Crosling/AAP

The statue unveiled in Melbourne’s Federation Square is not necessarily about the AFLW player; it serves a far wider purpose.

On International Women’s Day earlier this year, Federation Square in Melbourne was graced with the presence of a reproduction of artist Kristen Visbal’s “Fearless Girl”. The statue, originally unveiled in New York City’s Financial District, was a statement about gender diversity in the finance industry and was placed staring directly into the eyes of the charging Wall Street bull.

On Wednesday morning, another fearless girl immortalised in bronze was unveiled at the bustling Melbourne landmark: the Australian rules footballer, Tayla Harris. The statue, commissioned by the AFLW’s major sponsor NAB and which replicates the famous image of Harris captured by photographer Michael Willson, is a timely and much-needed addition to Australia’s celebration of female athletes.

It is perhaps no surprise that female athletes are severely under-represented when it comes to sporting statues. In her 2017 book, Breaking the Mould: Taking a Hammer to Sexism in Sport, Angela Pippos questioned the process of statue commissions and naming of stands and terraces when Adelaide Oval was redeveloped and opened in 2014. No women were originally honoured. “We gather around and applaud the unveiling of every new bronze statue of a man outside a sports stadium, but rarely question where the women are,” she wrote.

And here’s the big reveal at Federation Square today – a truly magnificent statue of @taylaharriss based on the now iconic photograph taken by @MichaelCWillson. pic.twitter.com/BbhSNuRVXi

At the MCG, women have little representation. Of the 16 statues that surround the famous old ground, only two are of women – Olympic athletes Betty Cuthbert and Shirley Strickland. To get a sense of the global representation, the academic online database from Pitch to Plinth archives statues from around the world. Though they do not have an exclusively Australian database, there are still many glaring omissions of women across their work in the UK and world sports. In the database of all known statues of cricketers from around the world, there are no women.

After the unveiling of the statue of Nicky Winmar at Optus Stadium in Perth this year, The Outer Sanctum podcast asked the week’s guests, AFLW players Melissa Hickey and Sabrina Frederick, who they thought the first AFLW statue should honour. The pair mentioned women’s football stalwarts Debbie Lee and Jan Cooper, both of whom credited each other for their own football journey– Lee in the creation of what was the Victorian Women’s Football League and Cooper leading the charge for women’s football in Western Australia. They discussed modern heroes Daisy Pearce and Erin Phillips, the winner of every AFLW accolade.

Harris might not have been at the forefront of that conversation, however the events of 19 March changed everything for the women’s sport landscape in Australia – maybe even around the world – and propelled her name to the top of the list.

Women’s sport has for a long time offered sanctuary to people who have not felt traditionally welcome at men’s sport events. Fans and athletes who have felt alienated by their favourite sports by their gender, sexuality, race, religion, abilities have embraced the inclusivity of women’s sport and the subsequent online communities that have developed in the years of growing social media platforms.

This statue then, is not really about Harris and nor is it really for her. This statue is for the women in sport community. It is for everyone who, on the night the powerful image of Harris was posted, trolled and deleted, saw the horrendous comments directed at her for simply doing her job as a footballer. It is for everyone who felt personally attacked in the degrading language those trolls and casual misogynists used to vilify not only Harris, but other athletes like Cecilia McIntosh, as well as whole communities of people, particularly those that identify as LGBTIQ+.

This statue is for everyone who had endured this intolerable behaviour long before the events of 19 March and had been made to feel inferior for being fans of women’s sport their whole lives. On that night, the world learnt that the women’s sports community has a voice, one that is passionate, powerful and unrelenting. It is a voice that altered the course of history and achieved something that had been so rare before Harris’ image was reposted with an unreserved apology: acknowledgment.

For everyone who spoke up, challenged the hate and called on the broadcaster to re-post the photo, this statue is a reminder of the collective strength a community can have to affect change. This image will forever be a symbol for the moment a marginalised community raised its voice and it was heard.

When we see that kick now, we see more than a kick. And for that, Tayla Harris is the perfect person to have this honour bestowed on her. Hopefully she is just the first in a long line of women in football and sport who receive acknowledgment in this way, but her grace in lending her voice to a campaign that was thrust upon her and boldness in becoming a leader for a community that needed one, is beyond admirable and deserving of a bronze statue. It is fearless.

This article was originally published by The Guardian.